A Treaty of Alliance and Friendship entered into and concluded by and between the Governors of the State of Massachusetts Bay, and the Delegates of the St. John’s & Mickmac Tribes of Indians.

Whereas the United States of America in General Congress Assembled have in the name, and by the Authority of the Good people of these Colonies Solemnly published and declared, that these United Colonies are, and of Right ought to be free and Independent States; that they are absolved from all Allegiances to the British Crown; and that all political connection between them and the State of Great Britain is and ought to be dissolved; and that as Free and Independent 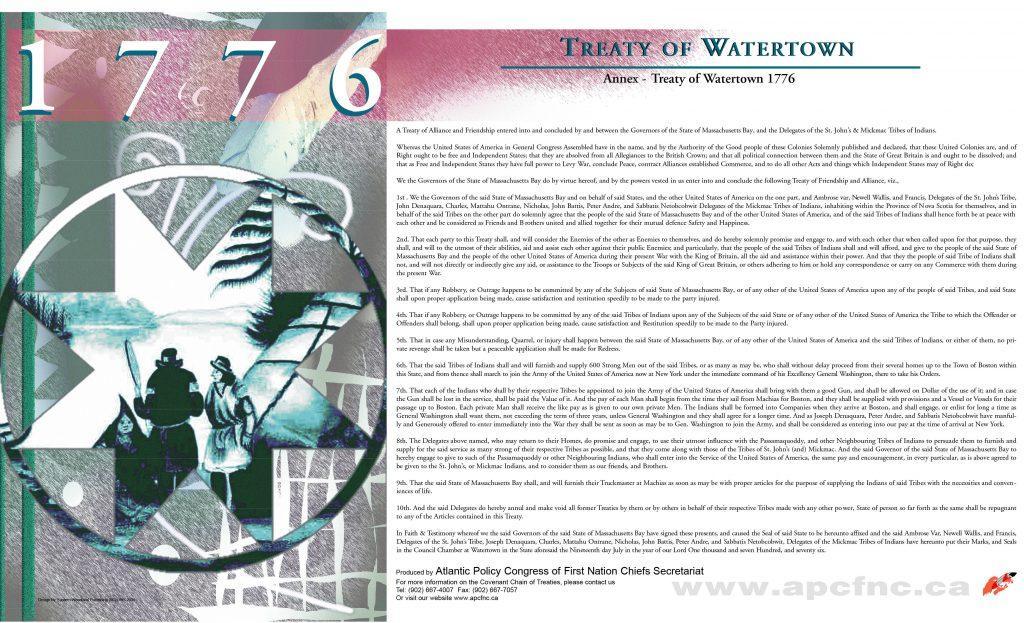 States they have full power to Levy War, conclude Peace, contract Alliances established Commerce, and to do all other Acts and things which Independent States may of Right do; We the Governors of the State of Massachusetts Bay do by virtue hereof, and by the powers vested in us enter into and conclude the following Treaty of Friendship and Alliance, viz.,

1st. We the Governors of the said State of Massachusetts Bay and on behalf of said States, and the other United States of America on the one part, and Ambrose var, Newell Wallis, and Francis, Delegates of the St. John’s Tribe, John Denaquara, Charles, Mattahu Ontrane, Nicholas, John Battis, Peter Andre, and Sabbatis Netobcobwit Delegates of the Mickmac Tribes of Indians, inhabiting within the Province of Nova Scotia for themselves, and in behalf of the said Tribes on the other part do solemnly agree that the people of the said State of Massachusetts Bay and of the other United States of America, and of the said Tribes of Indians shall hence forth be at peace with each other and be considered as Friends and Brothers united and allied together for their mutual defence Safety and Happiness.

2nd. That each party to this Treaty shall, and will consider the Enemies of the other as Enemies to themselves, and do hereby solemnly promise and engage to, and with each other that when called upon for that purpose, they shall, and will to the utmost of their abilities, aid and assist each other against their public Enemies, and particularly, that of the People of the said Tribes of Indians shall and will afford, and give to the people of the said State of Massachusetts Bay and the people of the other United States of America during their present War with the King of Britain, all the aid and assistance within their power. And that they the people of said Tribe of Indians shall not, and will not directly or indirectly give any aid, or assistance to the Troops or Subjects of the said King of Great Britain, or others adhering to him or hold any correspondence or carry on any Commerce with them during the present War.

3rd. That if any Robbery, or Outrage happens to be committed by any of the Subjects of said State of Massachusetts Bay, or of any other of the United States of America upon any of the people of said Tribes, and said State shall upon proper application being made, cause satisfaction and restitution speedily to be made to the Party injured.

4th. That if any Robbery, or Outrage happens to be committed by any of the said Tribes of Indians upon any of the Subjects of the said State or of any other of the United States of America the Tribe to which the Offender or Offenders shall belong, shall upon proper application being made, cause satisfaction and Restitution speedily to be made to the Party injured.

5th. That in case any Misunderstanding, Quarrel, or injury shall happen between the said State of Massachusetts Bay, or any other of the United States of America and the said Tribes of Indians, or either of them, no private revenge shall be taken but a peaceable application shall be made for Redress.

6th. That the said Tribes of Indians shall and will furnish and supply 600 Strong Men out of the said Tribes, or as many as may be, who shall without delay proceed from their several homes up to the Town of Boston within this State, and from thence shall march to join the Army of the United States of America now at New York under the immediate command of his Excellency General Washington, there to take his Orders.

7th. That each of the Indians who shall by their respective Tribes be appointed to join the Army of the United States of America shall bring with them a good Gun, and shall be allowed on Dollar of the use of it; and in case the Gun shall be lost in the service, shall be paid the Value of it. And the pay of each Man shall begin from the time they sail from Machias for Boston, and they shall be supplied with provisions and a Vessel or Vessels for their passage up to Boston. Each private Man shall receive the like pay as is given to our own private Men. The Indians shall be formed into Companies when they arrive in Boston, and shall engage, or enlist for long a time as General Washington shall want them; not exceeding the term of three years, unless General Washington and they shall agree for a longer time. And as Joseph Denaquara, Peter Andre, and Sabbatis Netobcobwit have manfully and Generously offered to enter immediately into the War they shall be sent as soon as may be to Gen. Washington to join the Army, and shall be considered as entering into our pay at the time of arrival at New York.

8th. The Delegates above named, who may return to their Homes, do promise and engage, to use their utmost influence with the Passamaquoddy, and other Neighbouring Tribes of Indians to persuade them to furnish and supply for the said service as many strong of their respective Tribes as possible, and that they come along with those of the Tribes of St. John’s (and) Mickmac. And the said Governor of the said State of Massachusetts Bay to hereby engage to give to such of the Passamaquoddy or other Neighbouring Indians, who shall enter into Service of the United States of America, the same pay and encouragement, in every particular, as is above agreed to be given to the St. John’s, or Mickmac Indians, and to consider them as our friends, and Brothers.

9th. That the said State of Massachusetts Bay shall, and will furnish their Tuckmaster at Machias as soon as may be with proper articles for the purpose of supplying the Indians of said Tribes with the necessities and conveniences of life.

10th. And the said Delegates do hereby annul and make void all former Treaties by them or by others in behalf of their respective Tribes made with any other power, State of person so far forth as the same shall be repugnant to any of the Articles contained in this Treaty.

In Faith & Testimony whereof we the said Governors of the said state of Massachusetts Bay have signed these presents, and caused the Seal of said State to be hereunto affixed and the said Ambrose Var, Newell Wallis, and Francis, Delegates of the St. John’s Tribe, Joseph Denaquara, Charles, Mattahu Ontrane, Nicholas, John Battis, Peter Andre, and Sabbatis Netobcobwit, Delegates of the Mickmac Tribes of Indians have hereunto put their Marks, and Seals in the Council Chamber at Watertown in the State aforesaid the Nineteenth day July in the year of our Lord One thousand and seven Hundred, and seventy- six.