Treaty of 1752
Articles of Peace and Friendship Renewed

Enclosure in letter of Governor Hopson to the Right Honourable The Earl of Holdernesse 6th of Dec. 1752 Treaty or Articles of Peace and Friendship Renewed BETWEEN

His Excellency Peregrine Thomas Hopson Esquire Captain General and Governor in Chief in and over His Majesty’s Province of Nova Scotia or Acadie Vice Admiral of the same & Colonel of One of His Majesty’s Regiments of Foot, and His Majesty’s Council on behalf of His Majesty, AND Major Jean Baptiste Cope Chief Sacham of the Tribe of Mick Mack Indians, Inhabiting the Eastern Coast of the said Province, and Andrew Hadley Martin, Gabriel Martin and Francis Jeremiah members & Delegates of the said Tribe, for themselves and their said Tribe their heirs and the heirs of their heirs forever.

Begun made and Concluded in the manner form & Tenor following, viz.

1. It is agreed that the Articles of Submission & Agreements made at Boston in New England by the Delegates of the Penobscot Norridgwolk & St. John’s Indians in the Year 1725 Ratifyed and Confirmed by all the Nova Scotia Tribes at Annapolis Royal in the Month of June 1726 and lately Renewed with Governor Cornwallis at Halifax and Ratifyed at St. John’s River, now read over Explained & Interpreted shall be and are hereby from this time forward renewed, reiterated, and forever Confirmed by them and their Tribe, and the said Indians for themselves and their Tribe, and their Heirs aforesaid do make and renew the same Solemn Submissions and promises for the strict Observance of all the Articles therein contained as at any time 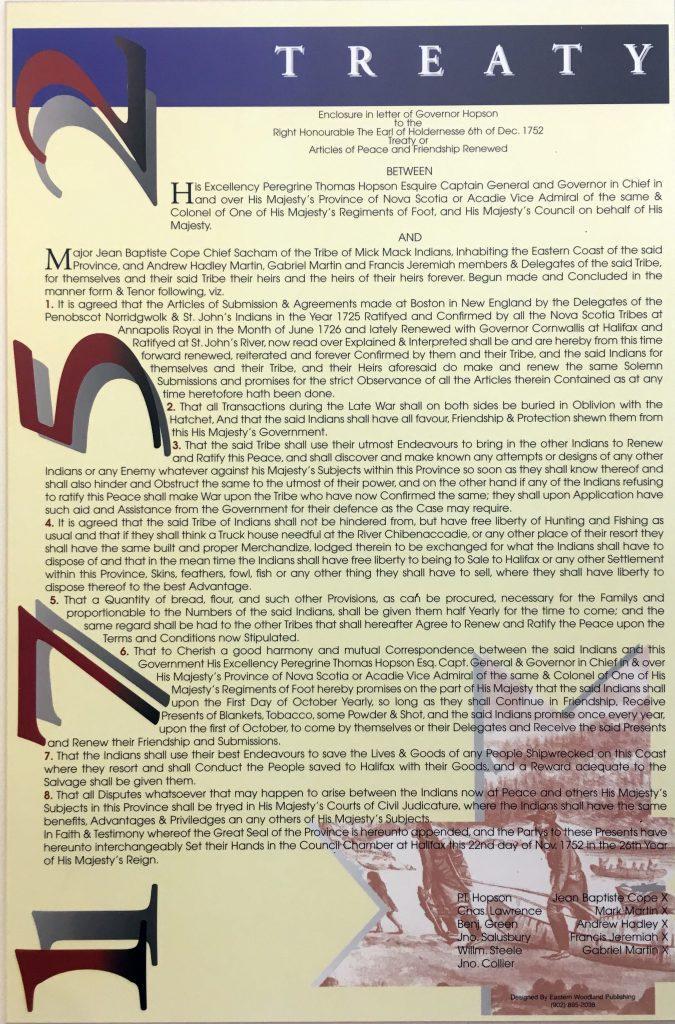 2.That all Transactions during the Late War shall on both sides be buried in Oblivion with the Hatchet, And that the said Indians shall have all favour, Friendship & Protection shewn them from this His Majesty’s Government.

3.That the said Tribe shall use their utmost Endeavours to bring in the other Indians to Renew and Ratify this Peace, and shall discover and make known any attempts or designs of any other Indians or any Enemy whatever against his Majesty’s Subjects within this Province so soon as they shall know thereof and shall also hinder and Obstruct the same to the utmost of their power, and on the other hand if any of the Indians refusing to ratify this Peace shall make War upon the Tribe who have now Confirmed the same; they shall upon Application have such aid and Assistance from the Government for their defence as the Case may require.

5.That a Quantity of bread, flour, and such other Provisions, as can be procured, necessary for the Familys and proportionable to the Numbers of the said Indians, shall be given them half Yearly for the time to come; and the same regard shall be had to the other Tribes that shall hereafter Agree to Renew and Ratify the Peace upon the Terms and Conditions now Stipulated.

6.That to Cherish a good harmony and mutual Correspondence between the said Indians and this Government His Excellency Peregrine Thomas Hopson Esq. Capt. General & Governor in Chief in & over His Majesty’s Province of Nova Scotia or Acadie Vice Admiral of the same & Colonel of One of His Majesty’s Regiments of Foot hereby promises on the part of His Majesty that the said Indians shall upon the First Day of October Yearly, so long as they shall Continue in Friendship, Receive Presents of Blankets, Tobacco, and some Powder & Shot, and the siad Indians promise once every year, upon the first of October, to come by themselves or their Delegates and Receive the said Presents and Renew their Friendship and Submissions.

7. That the Indians shall use their best Endeavours to save the Lives & goods of any People Shipwrecked on this Coast where they resort and shall Conduct the People saved to Halifax with their Goods, and a Reward adequate to the Salvage shall be given them.

In Faith & Testimony whereof the Great Seal of the Province is hereunto appended, and the Partys to these Presents have hereunto interchangeably Set their Hands in the Council Chamber at Halifax this 22nd day of Nov. 1752 in the 26th Year of His Majesty’s Reign.