The submission and agreement
of the Delegates of the Eastern Indians

Whereas the several Tribes of the Eastern Indians viz the Penobscot, Narridgwolk, St. Johns Cape Sables & other Tribes Inhabiting within His Majesties Territorys of New England and Nova Scotia, who have been Engaged in the present War, from whom we Sauguaaram alias Loron Arexus Francois Xavier & Meganumbe are Delegated & fully Impowered to Enter into Articles of Pacification with His Majties Governments of the Massachusetts Bay New Hampshire & Nova Scotia Have contrary to the several Treatys they have Solemnly Entered into with the said Governments made an open Rupture & have continued some years in Acts of Hostility Against the subjects of His Majesty King George within the said Governments, They being now sensible of the Miseries and Troubles they have involved themselves in, and being Desirous to be restored to His Majesty’s Grace & Favour & to live in Peace with all His Majesties Subjects of the said three Governments & the Province of New York and Colonys of Connecticut & Rhode Island, and that all former Acts of Injury be forgotten Have Concluded to make and we Do by these presents In the Name and behalf of the said Tribes make our Submission unto His Most Excellent Majesty George by the Grace of God of Great Britain France and Ireland King Defender of the Faith & C. in as full and ample manner as any of our Predecessors have heretofore done.

And we do hereby Promise and Engage with the Honorable William Dummer Esqr as he is Lieutenant Governor & Comander in Chief of the said Province for the time being That is to say.

We the said Delegates for and in behalf of the several Tribes aforesaid Do Promise and Engage that at all times forever from and after the date of these presents We and they will lease and forbear all Acts of Hostility Injuries and Discords towards all the Subjects of the Crown of Great Britain, & not offer the lease hurt Violence or Molestation to them or any of them in their Persons or Estates, But will hence forward hold & maintain a firm and Constant Amity and Friendship with all the English and will never Confederate or Combine with any other Nation to their prejudice. 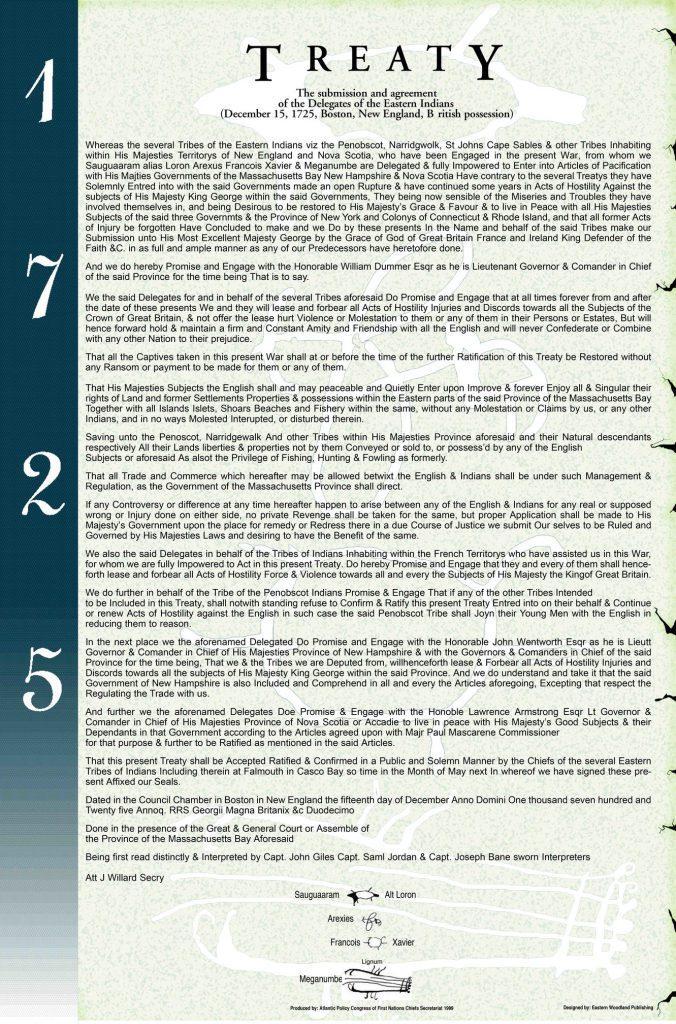 That all the Captives taken in this present War shall at or before the time of the further Ratification of this Treaty be Restored without any Ransom or payment to be made for them or any of them.

That His Majesties Subjects the English shall and may peaceable and Quietly Enter upon Improve & forever Enjoy all & Singular their rights of Land and former Settlements Properties & possessions within the Eastern parts of the said Province of the Massachusetts Bay Together with all Islands Islets, Shoars Beaches and Fishery within the same, without any Molestation or Claims by us, or any other Indians, and in no ways Molested Interupted, or disturbed therein.

Saving unto the Penoscot, Narridgewalk And other Tribes within His Majesties Province aforesaid and their Natural descendants respectively All their Lands liberties & properties not by them Conveyed or sold to, or possess’d by any of the English Subjects or aforesaid As alsot the Privlege of Fishing, Hunting & Fowling as formerly.

That all Trade and Commerce which hereafter may be allowed betwixt the English & Indians shall be under such Management & Regulation, as the Government of the Massachusetts Province shall direct.

If any Controversy of difference at any time hereafter happen to arise between any of the English & Indians for any real or supposed wrong or injury done on either side, no private Revenge shall be taken for the same, but proper Application shall be made to His Majesty’s Government upon the place for remedy or Redress there in a due Course of Justice we submit Our selves to be Ruled and Governed by His Majesties Laws and desiring to have the Benefit of the same.

We also the said Delegates in behalf of the Tribes of Indians Inhabiting within the French Territorys who have assisted us in this War, for whom we are fully Impowered to Act in this present Treaty. Do hereby Promise and Engage that they and every of them shall henceforth lease and forbear all Acts of Hostility Force & Violence towards all and every the Subjects of His Majesty the King of Great Britain.

to be included in this Treaty, shall notwith standing refuse to Confirm & Ratify this present Treaty Entered into on their behalf & Continue or renew Acts of Hostility against the English in such case the said Penobscot Tribe shall Joyn their Young Men with the English in reducing them to reason.

In the next place we the aforenamed Delegated Do Promise and Engage with the Honorable John Wentworth Esqr as he is Lieutt Governor & Comander in Chief of His Majesties Province of New Hampshire & with the Governors & Comanders in Chief of the said Province for the time being, That we & the Tribes we are Deputed from, willhenceforth lease & Forbear all Acts of Hostility Injuries and Discords towards all the subjects of His Majesty King George within the said Province. And we do understand and take it that the said

Government of New Hampshire is also Included and Comprehend in all and every the Articles aforegoing, Excepting that respect the Regulating the Trade with us.

for that purpose & further to be Ratified as mentioned in the said Articles.

That this present Treaty shall be Accepted Ratified & Confirmed in a Public and Solemn Manner by the Chiefs of the several Eastern Tribes of Indians Including therein at Falmouth in Casco Bay so time in the Month of May next In whereof we have signed these present Affixed our Seals.

the Province of the Massachusetts Bay Aforesaid