Media plays an important role in engaging community when an Indigenous person goes missing. It can mobilize people to search for a missing person, keep an eye out for them and help see them come home safely. Press releases by police are often shared on social media
and can similarly help locate a missing person. Often, the reports on missing persons end up recycling racist stereotypes and reinforcing wrong-headed ideas about Indigenous Peoples.

Since 2017, the Looking Out For Each Other project (LOFEO) has been collaborating with Indigenous organizations, community members, post-secondary institutions, and mainstream service providers across the Eastern region in order to develop culturally safe and appropriate approaches, resources and services for the families and communities of missing and murdered Indigenous people. This includes working with Indigenous community members and media professionals, and journalism academics to develop best practices and principles for improved reporting on missing Indigenous persons.

Indigenous People’s experiences in dealing with the media

We held Sharing Circles with community members, they voiced their concerns and shared their experiences with us when dealing with the media and how they see themselves as an Indigenous person being portrayed in the media.

“The education people receive about us [Indigenous people] and the history is just hearsay or what their families have said, or what they see portrayed in the media.”

There is also an uncertainty that exists when dealing with the media because people aren’t sure how their story will be portrayed or if it will even be reported on because they are Indigenous. People can often be reluctant to speak with reporters or to disclose information for fear of how it will be used. This stems from the history of how mainstream media has depicted Indigenous people and the harm that it has caused.

“If anything, that accomplishes from these Sharing Circles is to change the viewpoints of people or to educate people in those fields on the things that they could be doing better to help us, that’s kind of taking a step in the right direction.”

We wanted to work with journalists, filmmakers, journalism students and communications experts to learn what journalists were doing to improve media reporting about missing and murdered Indigenous women, document best practices and facilitate exchanges between families and media. To this end, we began working with Catherine Martin, a Mi’kmaq filmmaker based in Halifax.

In 2001, long before missing and murdered Indigenous women became a nationally recognized issue, Catherine made an important documentary about Annie Mae Pictou Aquash, a 30-year-old Nova Scotia born Mi’kmaq woman who was murdered in South Dakota in 1975. For over three decades, the crime remained a mystery. Catherine’s documentary “The Spirit of Annie Mae” was key to reviving the interest in this case, which ultimately led to the arrest, prosecution, and conviction of two co-perpetrators in 2010. You can watch the documentary on the website of the National Film Board.

Catherine has remained dedicated to helping families and friends of missing Indigenous people. She joined our project in 2016 and was instrumental in organizing the National Inquiry hearing in Membertou. On November 21st & 22nd, 2018 Catherine brought together community members, Indigenous media professionals, journalism academics and the LOFEO leadership team for an evening and full day of discussions. Our goal was to make connections, build relationships, learn from these professionals on best reporting practices, and how the project could contribute to bring about positive changes in reporting on Indigenous peoples.

Trina Roache shared her experiences working with the Saunders family and reporting on Loretta Saunders’ murder, as well as the preliminary inquiry, the guilty plea, and its aftermath.  She emphasized the importance of gaining the trust of the people whose stories are reported and noted how challenging it was to engage in responsible journalism in the face of very fast-paced sharing of information through social media.

Nic Meloney shared his experiences reporting from the National Inquiry hearing in Membertou.  He noted that there was a tension between reporting the individual stories and lived experience of participants in the inquiry process and the demands of the national broadcaster for contextual and systemic analysis.

Key outcomes of these discussions were the identification of the following guiding ideas for journalists reporting on Indigenous stories and issues:

Our early conversations paved the way for the two-day media cultural competency workshop we held at the University of King’s College in November 2019. Thanks to the help of Catherine Martin (Indigenous Film Maker), Nic Meloney (CBC Unscripted), Terra Tailleur (University of King’s College), Erin Moore (Nova Scotia Community College), and Duncan McCue (host of CBC Radio One Cross Country Checkup and Correspondent for The National) we were able to bring together a diverse group of media professionals.

The purpose of the workshop was two-fold; first, to increase awareness and knowledge of Indigenous traditions and customs by providing cultural competency training to a wide variety of media professionals and students in Atlantic Canada; second, to strengthen the guidelines we initially developed for reporting on Indigenous issues through media case study work and discussions.

The workshop started with a full day of cultural competency training, provided by Duncan McCue, based on his Reporting on Indigenous Communities Guide and research.

The second day of the workshop was devoted to media case study work by examining several stories about missing and murdered Indigenous women and discussing all aspects of the articles using the initial set of guidelines that we developed for reporting on Indigenous issues.

Looking Out For Each Other Project Art Expression 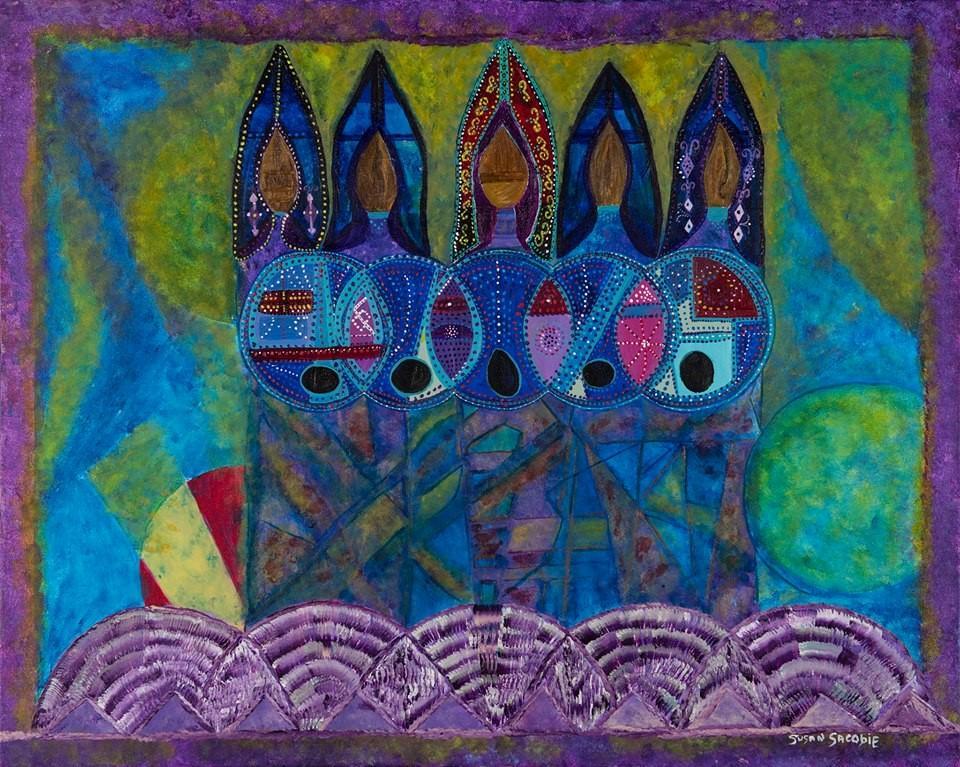 Local Wolastoq artist Susan Sacobie created a piece of art to represent the Looking Out For Each Other project. She says:“This painting is for the missing and murdered Wolastoqiyik & Mi’kmak women that were almost forgotten. The five women in this piece represent knowledge, faith, wisdom, justice and peace. They are wearing our traditional peaked hats decorated with the double curve motifs. The wampum belt on the bottom is our promise to each woman that their lives will be remembered, celebrated, honoured. The wampum belt is also a promise to each Native woman that we have to rebuild our matriarchal standing within each of our families & communities. We must humble ourselves and learn and teach one another about who we are, where we come from and to not be silent and share our individual stories so we can empower our sisters, stay connected and strong and in turn we keep our families and communities strong. Their connecting shields are protecting us and reminding each of us that it is an obligation and a privilege to guard one another because we are all connected.  As mothers and daughters, the living as well as the women who crossed the rainbow bridge we have to tell ourselves and each other our lives matter, we are important and we have to love and respect each other unconditionally and stand together.” These words and the voices of Indigenous women will continue to guide the project.